'Mississippi Masala' was released 30 years ago. Here's how it still resonates with audiences today

There's a scene halfway through "Mississippi Masala," where Denzel Washington and Sarita Choudhury are just talking.

They're both lying in their respective beds, a phone cradled to their ears. His hands fiddle with the bottom of his shirt, exposing a soft belly. Hers absentmindedly run through her hair; the camera pans down her legs.
The two characters -- Washington's Demetrius and Choudhury's Mina -- are miles apart in the scene, nowhere near touching. Still, the tension is arresting.
"The one thing I'm consistently hearing now is that it is amongst the sexiest films of all time," director Mira Nair told CNN with a laugh. "And everyone is kind of unanimous about discussing the phone scene."
Nair's "Mississippi Masala," first released in 1991, became somewhat of a cult classic -- but in recent years, actually finding a copy of the film was difficult. Now, Criterion Collection has released a 4K digital restoration of the film supervised by Nair and cinematographer Edward Lachman. The film is also in the midst of a national theatrical rollout, exposing it to new audiences across the country.
The premise of "Mississippi Masala" is both simple and complex. At its core, the film is a love story between a young Indian woman born in Uganda and an African-American carpet-cleaner who has never left Mississippi. But Nair uses this love story to draw attention to some difficult realities: pointing out colorism, racism, anti-Blackness, classism and xenophobia across races, while also asking hard questions of humanity and identity.
After all, what does it mean to be from a place? What is home? What is belonging? What is race? Somehow, "Mississippi Masala" digs into all of it -- and does so while deftly evading any semblance of sermonizing.
'Mississippi Masala' started at Harvard
Nair's own experiences as a student at Harvard University ground the film. Her arrival in Cambridge, Massachusetts marked the first time she had left India, her home country, and she found herself living between the Black and White communities at the school. Both let her in, but she felt the borders between the two. This is how the idea behind "Mississippi Masala" first grew.
Later, she learned about the expulsion of Asian people from Uganda, and about Indians who moved to Mississippi, because it was one of the only places they could afford to buy their own businesses, particularly motels. The outlines of the film's story began to take shape.
This history piqued Nair's interests. These Indians left Africa, having never known India as home, and arrived at one of the centers of the civil rights movement in Mississippi, amongst African Americans who had never known Africa to be their home.
"What a strange trick of history this might be," she thought at the time. 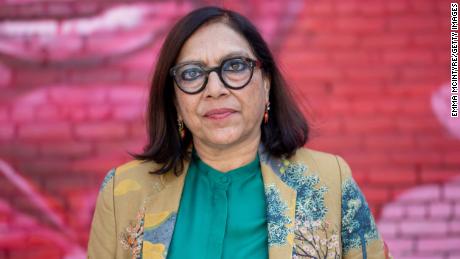 Mira Nair's experiences at Harvard shaped the film's story, which she later developed with screenwriter Sooni Taraporevala.
Mina's family is based on those Indians, expelled from Uganda and working in Mississippi motels. Throughout the film, Nair uncovers the connection between Mina's community and Demetrius' African American lineage.
Nair and screenwriter Sooni Taraporevala -- who wrote two other Nair films, "The Namesake" and "Salaam Bombay!" -- took a months-long trip across the South, staying in Indian-owned motels and meeting the real-life people who would influence the script. Nair interviewed thousands of Ugandan exiles, she said, and the two also traveled to the East African country to meet with some who had refused to leave or who had begun to return.
The attention to detail is rich throughout the film. But it averts some of the more sinister elements of its subject matter, even playing some of the more racist moments for laughs. Two recurring racist White characters, for example, keep confusing Indian people with Native Americans, saying things like "Send them back to the reservation" -- something Nair and Taraporevala experienced during their trip.
"Portraying the reality of what we were living around was so funny compared to anything else, and yet it was a portrait of ignorance and of complete oblivion about what the reality of the world is," Nair said. 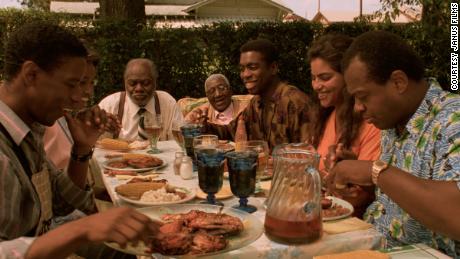 A scene from "Mississippi Masala" shows the family sharing a meal together.
Urmila Seshagiri, a professor at the University of Tennessee Knoxville, has taught "Mississippi Masala" in her classes for over two decades. But before she was a professor, she was an excited college student -- one who had driven into Cleveland from Oberlin College to see the film at an art house.
"To see an Indian woman in a feature film as the main character was astonishing at that time," Seshagiri told CNN.
Months later, she took her parents to see the film too. It's been decades, but she remembers the audience in that theater: the Black people all sat on one side, the Indian people on the other.
The film's Criterion rerelease speaks to its enduring radicalism. Seshagiri used an early moment in the film as an example: When Mina's family moves from Uganda to Mississippi, their journey is depicted over a map. As the camera pans from Uganda to England, the journey is soundtracked with Indian classical flute -- which then morphs into a blues instrumental reminiscent of the Mississippi Delta. It's a subtle shift, but a brilliant one, she said.