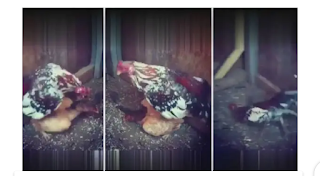 A funny video presently dominating a section of the social media landscape has sparked varied reactions from netizens.

The viral footage captures the moment a rooster mounted its female counterparts and initiated an intense mating session. But the lovemaking soon turned into anti-climax after the male bird got down from the fowl and dropped dead.

Away from that, a video has surfaced on social media detailing how a Ghanaian woman was reportedly buried in a p𝑒𝓃𝒾𝓈-shaped casket.

The video which has surfaced online to corroborate this awkward report has created much fuss and created intriguing conversation amongst netizens already. It emerged that the deceased had ten children with ten men and this ultimately makes her a ‘record breaker.’

Apparently, the video which sees scores of people paying their last respects to the woman was shared months ago on the internet but has been reinforced once again after NPP stalwart Gabby Otchere-Darko came across it for the first time and shared it on his Twitter account.

He wrote: “I am told this was the final funeral rites with the casket of an amazing woman who died leaving behind 10 children from 10 different men here in Ghana. May she rest in p…”