Mirabel Obi, student of the University of Nigeria, Nsukka (UNN), has alleged that her father lost contracts because of her twerking video that went viral.

Mirabel, the 100-level student of medical laboratory sciences, became a sensation on social media after a video of her participating in a dancing contest surfaced online.

The video clip had sparked controversies, even as an official of the institution was said to have threatened to facilitate her expulsion.

In a post via her Instagram story on Thursday, Mirabel wondered what she had done to deserve the backlash coming her way since her video found its way online.

The student claimed she had faced harassment and hate speech, saying some people even called her a “prostitute”. 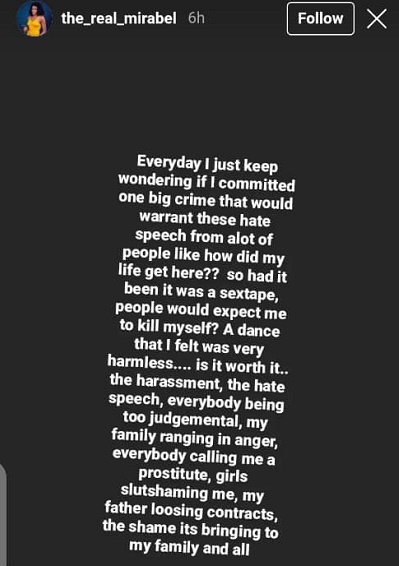 Mirabel said her family has also been angry with her since the incident over the “shame the video has brought upon them”.

“Everyday I just keep wondering if I committed one big crime that would warrant these hate speech from a lot of people like how did my life get here?? So, had it been it was a sextape, people would expect me to kill myself?” Mirabel queried.

“A dance that I felt was very harmless…. is it worth it.. the harassment, the hate speech, everybody being too judgemental, my family raging in anger, everybody calling me a prostitute, girls slut-shaming me, my father losing contracts, the shame it’s bringing to my family and all.”

The student said she’s “very tired”, adding that her critics “will rest when she leaves.”

“I’m very tired. Maybe when I leave, you all will rest,” she added.

Mirabel had earlier dismissed claims that she was expelled from the institution.

Twerking: “Our degrees are for students with good character” – UNN