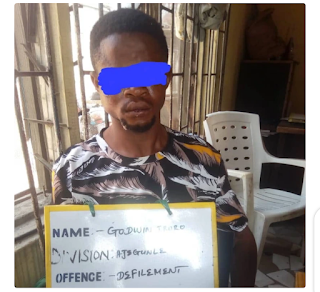 A man who is a father of four children has been arrested by the operatives of the Lagos State Police Command after he was discovered to have defiled the daughter of one of his friends at the house where they both live, the command announced in a statement on Saturday, November 27.

The man, whose name was given as Godwin Iroro and who is a father of four children but who had separated from the children's mother, was said to have been arrested by police detectives attached to the Ajegunle Division on November 25 after defiling the daughter of one of his friends who is also said to have been separated from the mother of the girl.

It was gathered that Iroro was arrested following a complaint lodged at the police station by the father of the girl who noticed the unusual and awkward movement of the girl and asked her what went amiss with her.

According to a statement by the state police command through its Public Relations Officer, Adekunle Ajisebutu, posted on his Facebook wall on Saturday, November 27, the girl was said to have disclosed that the man, who also lives in the same house at Number 5, Iyalode Street, Ajegunle, Lagos, had carnal knowledge of her when her father was not at home.

Preliminary investigation carried out by the police revealed that both men are separated from their wives. While the girl lives with her father at the said house, Iroro's four children are said to be living with their mother in Asaba, Delta State.

After the arrest of the man and upon interrogation, he was said to have confessed to the crime but blamed it on the devil. He also confessed to have abused the girl twice before the latest incident was uncovered.

The statement added that the Commissioner of Police in Lagos State, Mr Hakeem Odumosu, has directed that he should be transferred to the Gender Unit of the Police Command for more investigation and will be prosecuted at the conclusion of investigation.