After the religious exercise, the man surprisingly burst into soft sobs. 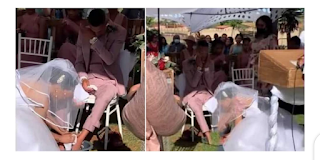 In the video, the bride despite rocking the white wedding dress bent to wash her groom's feet before guests

Different couples come up with incredible activities for their wedding occasions that can best be explained themselves at times, and for a couple theirs was feet-washing.

In a video that has sparked debate on social media, a bride despite wearing her flowing wedding dress stooped to wash her groom's feet at their wedding.

The bride carried out the act lovingly right in the full glare of all the guests that graced their occasion.

Like it was expected, a lady brought a small piece of clothing for the groom while the bride was focused on her task quietly.

In a split second, the groom burst into soft sobs and first wiped his face with the small clothing he was handed before supporting it with his other hand.

The video which was shared on Instagram by Instablog9ja stirred mixed reactions on social media. 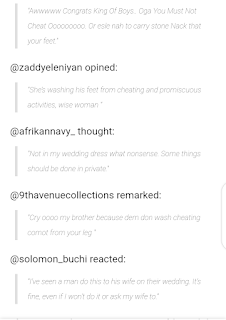 Meanwhile, Legit.ng previously reported that a shy groom had shed tears as his parents escorted him to join the bride on their matrimonial bed.

In a short video shared by Wisdom Blogg, the groom was also joined by his in-laws who came with smartphones in numbers to capture the occasion.

In what appears to be a Muslim union, the groom first offered a handshake to the bride who was already dressed and seated on the bed.

He sat somewhat unsettled beside the unperturbed lady while an Imam read the rites.

After the religious exercise, the man surprisingly burst into soft sobs.