The goal is Rihanna: Fans react as Don Jazzy says Brandy is entering his eyes 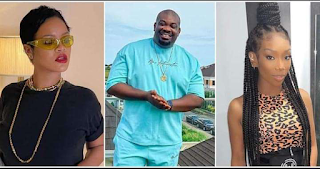 Nigerian music mogul Don Jazzy seems to be losing hope of being with US singer Rihanna.

The music producer got his followers talking when he reacted to a video of American singer Brandy dancing with Tiwa Savage.

Don Jazzy shared the cute video of the women on his Instagram page and stated that Brandy is entering his eyes. Although Don Jazzy shared Tiwa's video to promote her song, the music producer's fans are more focused on his statement about Brandy.

Ahh @tiwasavage Queen Brandy is entering my eyes o. Oya challenge time. Who will join me let’s do this dance."Don Jazzy said:

Nigerians are asking the All Is In Order singer to focus on his first love which is Rihanna.

"The goal is Rihanna or nothing."

"@donjazzy wallahi when I saw this video in the morning, those exact words came to mind..... I said you may shift focus and here you are."