“Someone Toasted My Girlfriend and Gave Her Money, She Used It to Cook for Me”- Young Man Reveals 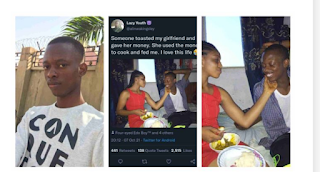 Twitter has been buzzing with laughter over a statement which was made by a Nigerian man who is currently making rounds on the internet.

According to a post from the man identified with the username “Lazy Youth“, the young man stated that his girlfriend used the money she collected from an admirer to cook and feed him.

Sharing a photo of this moment on the microblogging platform, the young man said;

Someone toasted my girlfriend and gave her money. She used the money to cook and feed me. I love this life.

However, people are reacting to this event and some are of the opinion that the man’s girlfriend had hooked up with the guy who gave her the money without telling her boyfriend.

See some reactions below;