Moment Wizkid’s Fan Hugged Him But Wizkid Looked Back And Said “Guy You No Be Woman Now, Cool Down!” (Video) 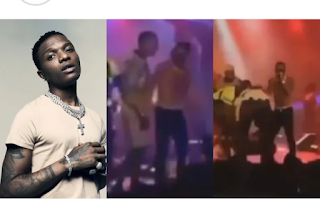 SeniorNG has stumbled upon a hilarious video of Wizkid’s fans, who climbed the stage to hug the singer but was disappointed.

In a video, which emerged online few hours ago and currently circulating on internet, shows moment the Grammy award winning singer was performing on stage and a fan sneaked and hugged him.

However, Wizkid’s reaction moment he looked back and saw the fan was pure savage. Wizkid told him to stay calm because he’s not a woman, immediately bouncers rushed him and pushed him away.

fans to stop handling him just like the first fan did, while he was still cautioning them another fan climbed the stage and held him on his leg and he fell down.

The video has since generated several reactions from social media users with many reacting in different perspective.