2 Nigerian women block road with their cars in London, refuse to move in video 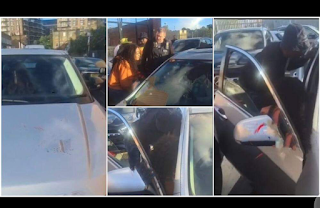 A viral video showing two women unmoved in their cars as a long queue of vehicles formed behind them has stirred massive reactions on social media.

A Nigerian man who was filming them said that the women have held traffic for more than an hour as they tried to prove their right of way.

When another woman approached them to beg them to allow other cars to pass, the man filming said there was no need for that, adding that the police would soon step in.

Moments later, two officials showed up as they attempted to calm the situation. When the man was cautioned against filming, he said it is his right to do so.

Watch the dramatic video below:

Watch and enjoy the video here

At the time of writing this report, the video has gathered over 100,000 views with hundreds of comments.